The clever folks at Public Laboratory for Open Technology and Science have invented a thermal flashlight. It uses a non-contact thermometer to measure the temperature of whatever you point it at, and then it shines a light back on that location, with a color depending on the temperature. So if you shine it at the fridge, it's blue, vs. at the teakettle, it's red. The question is... how can you make an image of a whole scene with just this flashlight? It turns out that one answer is glowdoodle! 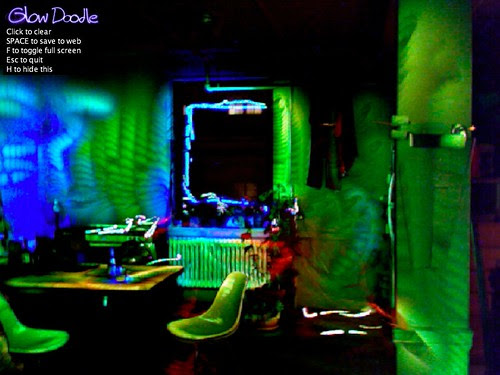 That well on the left is blue, meaning it's a little cooler, but the radiator is red hot! See more pics here.


It may be that glowdoodle is slightly better than standard lightpainting techniques for painting a scene with the thermal flashlight. One reason is that a camera sums the brightness of incoming light at each pixel over time, while glowdoodle instead uses the maximum brightness it has seen at each pixel. That means that with glowdoodle the brightness in each location will depend less on how fast you move the flashlight around, so it won't blow out the colors into white, and generally you'll get more consistent results. With glowdoodle you see the results as you go (rather than having to wait until after the exposure), so it's easier to cover a whole area accurately. And with glowdoodle you're not limited to a fixed exposure duration- you can paint indefinitely.

Hamlet Lin of Discovery College in Hong Kong has set up an installation of Glowdoodle for the school's annual Arts Fest. There are seven stations running a version of glowdoodle modified to upload to their own server, where they quickly generated over a thousand light paintings. Cool. Check them out here. 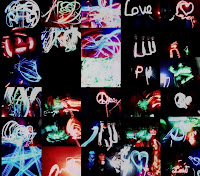